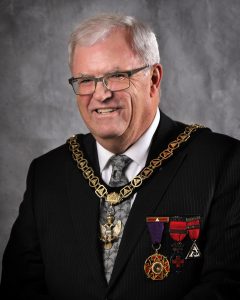 David Bennett was born in Huntsville, Ontario on March 29, 1954 where he grew up and attended Huntsville High School. He is a Graduate of the Radio/TV Program (1974) at Canadore College North Bay, Ontario. While beginning his working career with the Globe & Mail he went on to a career as an on air announcer with CFBK Radio in Huntsville followed by working with a marketing firm in the States. Dave joined CTV in 1981 as an Account Executive/Sales Manager in Timmins where he also filled in on air when the need arose. He spent time in the Ottawa Valley before moving to North Bay in 1996. He retired in 2014. Dave married Aurore (Leblond), on July 19, 1997.

Dave became a Member of the Valley of North Bay A.A.S.R. in 1991 and a Member of Hamilton Sovereign Consistory, May 7, 1992. He served as T.P.G.M. North Bay Lodge of Perfection from 2002-2003 and as M.W.S. North Bay Chapter of Rose Croix from 2006-2007. He was coroneted an Honorary Inspector-General in Halifax, September 14, 2006 and crowned Sovereign Grand Inspector-General at the Supreme Council sessions in Halifax September 13, 2014. On September 19, 2015 in Windsor, Ontario, he was installed as the Deputy for Ontario. He is pleased to serve on the Clarion, Communications and Education & Enlightenment Committees at Supreme Council. He was initiated into the Royal Order of Scotland in April 2016. Dave was elected Lieutenant Grand Commander at the Supreme Council sessions in London, Ontario September 15, 2018 and installed as Sovereign Grand Commander in Saskatoon, Saskatchewan September 17, 2022.

Dave is a Member of Rameses Shriners No. 33 & Rorab Shrine Club North Bay (current Chaplain) as well as a Member of the 183 Club (President 2006), Member of Fidelis Chapter No. 99 O.E.S. and former Secretary-Treasurer of the North Bay Masonic Temple Board Ltd.

His hobbies include curling, golf; travel and cottage life. He has held a number of executive positions in hockey, fastball, lacrosse, golf and curling. Dave also enjoyed serving terms on the Timmins & District Chamber of Commerce and Near North Crime Stoppers. Among his broadcast career hi-lights were times spent co-hosting several Easter Seals and Children’s Christmas Telethons. He is often called on as Master of Ceremonies for various events. He was the Co-Chair of the 2015 Canadian National Mixed Curling Championship, pleased to serve on the 2016 Men’s Northern Ontario Provincial Men’s Curling Championship Committee and Vice-Chair for the 2018 Ford World Women’s Curling Championship held in North Bay. Dave was honoured to receive the John Toswell Award from the North Bay Sports Hall of Fame for his contributions to Curling & along with his Vice-Chairs named North Bay Kiwanis Club’s Citizen of the Year for 2018.

Past Sovereign Grand Commanders Since 1874